Chalking Back To Happiness ¦ Oxford Moments

Playful chalk drawings seem to magically appear in Oxford’s Florence Park from time to time, only to be washed away by the rain… and replaced not long after by other delightful drawings and poems. Writer Yang-May Ooi finds out who is Chalky, the Oxford local behind these fun ephemeral pictures.

Chalking Back To Happiness ¦ Oxford Moments

Late in the afternoon in October last year, we went for a stroll in Florence Park. It was at the end of my first day in my new house. I needed a break from all the unpacking and it was a relief to get away from the barricades of boxes strewn across the floors.

One of the attractions to me for choosing my house in the Florence Park area was that it is a few minutes walk from the park for which this area is named. My old house in London was two minutes walk from Dulwich Park and I walked in that park almost every day for 18 years – so it was important to me  to be similarly close to a green community space in my new life. 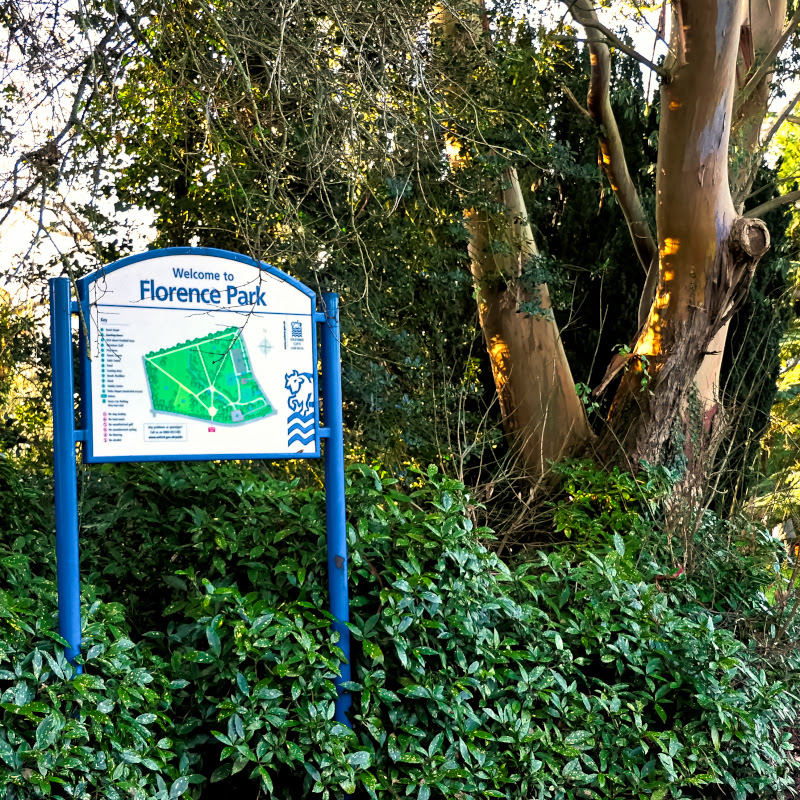 Florence Park is smaller than Dulwich Park but has not only a cafe but a community centre. There is a play area for kids and a small football field as well as lovely open vistas and a striking avenue of trees. Tarmac paths criss-cross the park, opening up into the occasional circular clearing.

As we strolled along, we noticed playful cartoon figures and objects chalked on the paths. In one of the open clearings, the poem “Jabberwocky” had been written out in full in multi-coloured chalk.

We stood and took our time reading the poem, walking around it to get to ends of the lines.

Twas brillig, and the slithy toves
Did gyre and gimble in the wabe…
….

A poem by an Oxford poet full of delight and nonsense wordplay. A poem I had studied as part of my linguistics module when I had been a student here. A poem I loved for its lilting rhythm and silly rhymes. A poem that made us smile in that moment and forget Covid, tiered restrictions, boxes yet unpacked and the pain of lost relationships.

It felt like a sign from the Universe that my new life would be creative and playful. And that I had landed in a neighbourhood of fun, warm-hearted and community-minded local folk.

We wondered who had chalked the poem – and the other pictures around the park. Or had it been the work of a gang of chalkers? Was it a one-off or did they chalk at other times? Was it a Council or other community initiative? Or was it the work of maverick artist, like Banksy?

As it turned out, Florence Park folk are an amazingly friendly and welcoming bunch and within a month, I had met the mystery chalker – who is actually not that mysterious to FloParkers, although the local Oxford press had dubbed her Chalky, in a nod to the internationally reknowned but anonymous street artist.

Jane Gallagher has lived in Florence Park for about 12 years and is well-known for publishing the local newsletter and her involvement in the Florence Park Community Centre. She took me on a walk around the local area the other day, through the park and across Cowley Marsh Park to the Lye Valley Nature Reserve. Along the way, we kept stopping as she met neighbours and locals she knew – and some others she did not know but to whom she said hello anyway, exchanging warm and friendly chit chat with everyone. 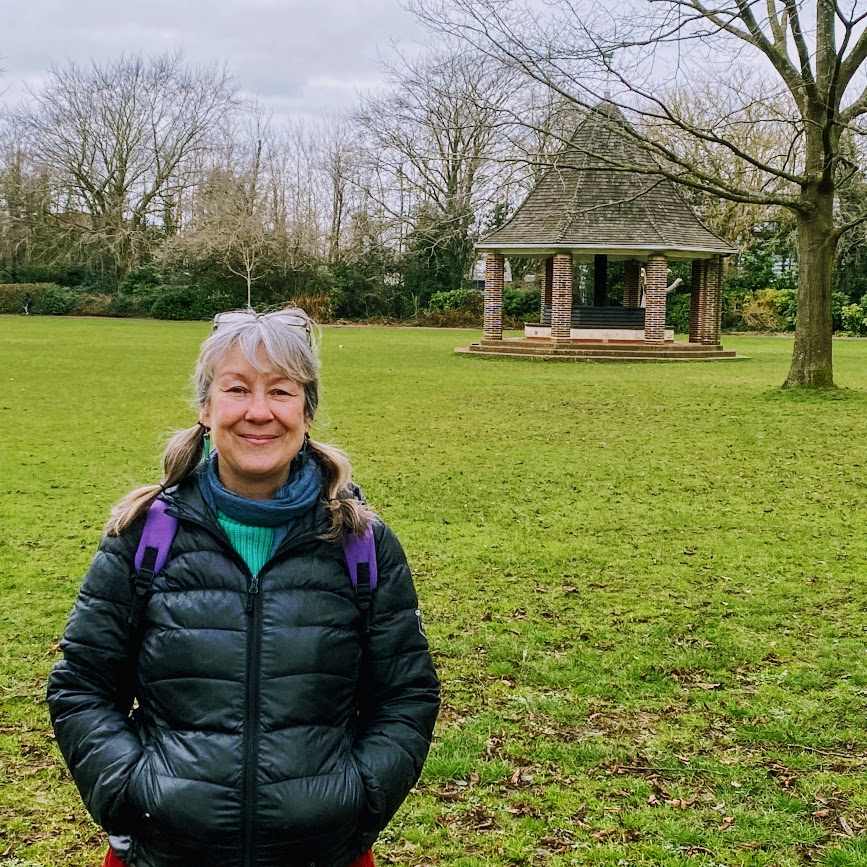 I’ll let her explain her chalking in her own words on her Florence Park Chalking website she set up only last year:

“During the pandemic of 2020, I started chalking games, puzzles, pictures and rhymes in my local park (Florence Park, Oxford) hoping to give playful fun and light relief to families (and maybe to others too).

“The rain would come and wash the chalk away, and I would start again with new ideas. Some of the ideas came from my imagination, and some were borrowed from people on the internet – thanks to them.” 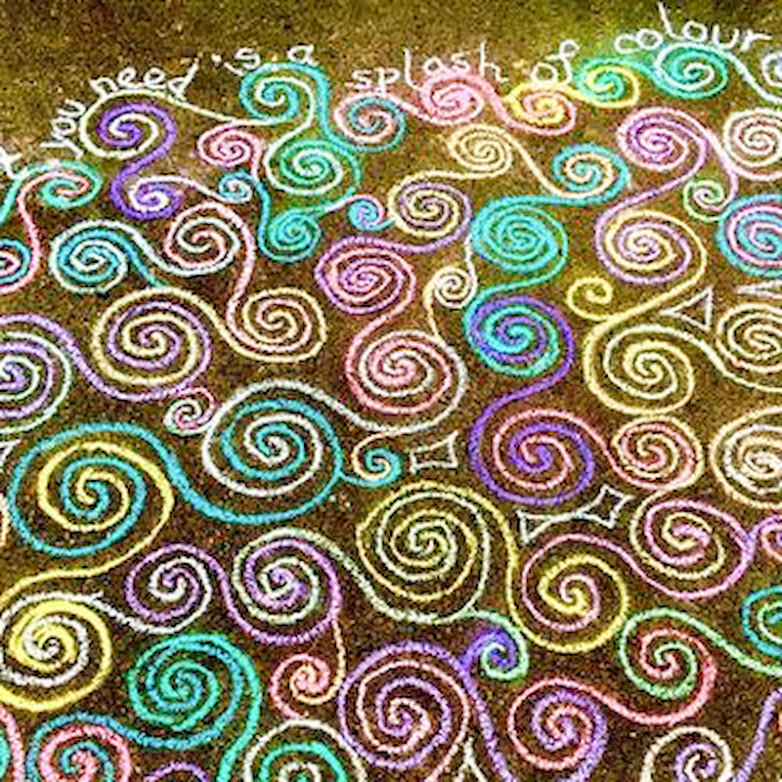 I love this story on her website about an encounter one day while she was chalking rainbows in languages used locally by people in the Cowley area:

“Whilst doing them, a little girl asked what I was doing. As we chatted, she said she was in the park to celebrate Eid with her family. I asked if she’d like me to chalk an Eid pattern, and she helped me – then her family joined in and we created an Eid message together. A passer-by was on video chat to his wife in Pakistan, and she took screenshots to show her friends! International chalking.”

She would love to hear from you if you’d like more info – go to her contact page https://florenceparkchalking.mystrikingly.com/#contact-us

The contents of this site, including any post, comments and links, are subject to this Disclaimer – please read it by clicking here.
« Welcoming Back the Rhythm of the Street ¦ Oxford Moments Theatre is Not Limited – The Michael Knight Theatre Company CCV0403 ¦ Creative Conversations [podcast] »