Multi-media storyteller Yang-May Ooi recounts how she gave up being sensible and fell into the Cult of the Brompton as part of her project to re-connect with nature.

I resisted for a long time.

I would look longingly at the  Bromptons whizzing by as I walked through London. They looked fun and zippy. It was clever, the way they could be so easily folded up into a tiny little package.

But they are only for city riding and I did not plan ever to tackle scary London traffic on a bike. I didn’t need a Brompton, a sensible voice in my head told me. I walked everywhere I could, bus hopping or taking the tube or train for longer distances. There are Ubers and other cabs I could take if public transport let me down.

If I got a bike, my sensible self told me sternly, it would be a touring one so I could go out into the countryside. Because, as my sensible friends would advise me, those tiny 16 inch wheels can’t be used for touring or off-road riding.

And Bromptons are expensive. A touring bike would be cheaper. Especially for what I want to do, which is go on cycle rides outside towns and cities.

It all made sense, these very good reasons not to get a Brompton.

But the Brompton seduced me in the end. I mean, look at this rugged guy in the photo on their website. Yes, the Brompton is for city riding, the picture says, but it’s also got what it takes to go off into the Wild West, the unknown, places where it takes cajones to get to…

I want to be that guy… or, at least, the 50+ year old female version of a guy like that!

Also, the internet is a wonderful thing. It showed me a ton of blogs and stories about people who had done long distance touring with Bromptons. It’s called bikepacking, apparently, and there’s a sub-category of Brompton-packing. And the way that Brompton riders talk about their bikes has an enthusiasm and love and excitement that is very enticing…!

There are loads of Brompton riding groups, all talking techy stuff about their beloved bikes, including a group who go out countryside cycling from London. As my friends know, I’ve always been a bit of a gadget and tech freak so it’s not surprising that the Brompton’s air of being an elegantly designed, rather large gadget coupled with all the cult-ish tech talk online got me even more excited…

So, very unsensibly as is the way with seduction into a cult, I got myself a black Brompton the other day – and I LOOOOVE IT!

Whizzing into adventure.. I hope

OK, I will ‘fess up and admit that at the moment, I haven’t gone anywhere very exciting with it yet – those tiny wheels do take some getting used to and I’m practicing my whizzing around in our local park and quiet suburban streets.

But with summer coming upon us, I can’t wait to have the wind in my hair (under the helmet) and the trees and fields of the open country sweeping along beside me as we take rides out in the countryside. So stay tuned for more reports on ReWilding My Life from atop my Brompton… 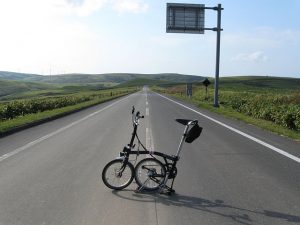 Guy with bike – from the Brompton website, with thanks – Brompton Bikes – Folding Bikes for Commuters in Cities & Urban Areas

Brompton on the open road – CCL By shirokazan – originally posted to Flickr as The open road, CC BY 2.0

ReWilding My Life is a Tiger Spirit project about re-connecting with nature and a more natural way of being, conceived and presented by Yang-May Ooi and produced by TigerSpirit.co.uk.

Yang-May Ooi is a multimedia author & TEDx speaker. Her creative projects include Bound Feet Blues (theatre), South London Voices and Creative Conversations (podcasts). She also works with individuals, non-profits and small businesses to help them tell their unique stories to engage and inspire others. ¦ www.TigerSpirit.co.uk

The contents of this site, including any post, comments and links, are subject to this Disclaimer – please read it by clicking here.
« Dancing in the Fountains of Youth ¦ ReWilding My Life Bound Feet Blues is part of the Sight / Unseen Drama Conference ¦ Bound Feet Blues »