The other day, my partner made some delicious pasties for lunch. “Cornish pasties!” I cried as I sat down at the kitchen table. “They look yummy!”

They were pasties, yes, but made in Oxford – so I guess they were Oxfordshire pasties. (Possibly even Swedish pasties? Ha ha.) But definitely not Cornish ones.

I’m not being pedantic. Cornish pasties have protected status bestowed by the European Commission and only pasties made in Cornwall from a traditional recipe can be called “Cornish” pasties. (After Brexit, does this protected status still hold?) The Comfort of a Cornish Pasty

Strictly speaking (again), I cannot say that Cornish pasties are my taste of “home”. I’m not from Cornwall and have never lived there. We did not have them in my childhood home. And I don’t make Cornish-style pasties as part of my regular meal base. But they are part of my range of foods that can give me that contented feeling of settling into a comfy sofa, snug and warm and safe at home.

And I have always enjoyed Cornish pasties ever since I first tasted them as a teenager newly arrived in the UK. They are brilliant on a cold, winter’s day eaten steaming hot while standing outside a pasty van. It can be difficult to find good ones with the right consistency of pastry that’s flaky but not too dry and moist but not too soggy and with a good ratio of meat to potato in the filling. But when I do, they are very yummy in my tummy. 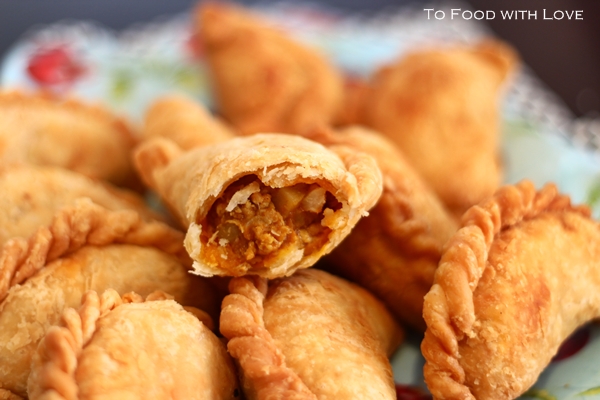 The Comfort of a Curry Puff

I’ve been writing on this blog about my home in Dulwich and my new home here in Oxford. I’ve been in the UK for several decades and it is my home. But there is another home, too, the place where I grew up – Malaysia.

The shape of Cornish pasties makes me think of the Malaysian curry puff, also a savoury meat-filled pasty with a half-moon shape and crimped edges – but with a curry flavour. It is usually smaller in size, like a little purse of deliciousness that can fit comfortably into the palm of a child’s hand. It is sometimes baked and sometimes deep-fried, depending on the recipe.

Curry puffs are definitely my taste of home, made by my grandmother in Taiping, a small town in Malaysia. The Malaysian curry puff is one of the many iconic flavours of home for the Malaysian diaspora, along with nasi lemak and laksa – no doubt bringing back memories for others like me of hot afternoons and meals at home made by countless other grandmas.

As I polished off our lunch, I said, “Now we’ve had your ‘Oxfordshire’ pasties, I want to make you Malaysian pasties.”

I don’t have my grandmother’s recipe for curry puffs so Google was the next best thing. There are numerous recipes online and it was somewhat overwhelming – but I mixed and matched a handful of them and re-calibrated the ingredients based on what was in my fridge and the taste that I was reaching for.

I fried up chopped onion and ginger with minced pork and finely sliced leeks, adding turmeric, mild curry powder and soy sauce to taste, with a dash of Lea & Perrins.

I cheated and used frozen flaky pastry rolled out and cut into circles. This was the way that my partner had made her ‘Oxfordshire’ pasties and she showed me how to gauge the size and make the most of all the pastry, without wastage.

I filled half of each round pastry base with the filling and folded them over into fat semi-circles. Being lazy, I decided to make giant curry puffs the size of clutch bags rather than purse-sized parcels.

Using the gloop of a beaten egg as glue, I pinched the edges together. The remaining egg was smeared over the top side of the crimped parcels. Then they all went into the oven at 200 degrees for 25 minutes.

They were not exactly the taste of the curry puffs that my grandma used to make – nor of those that you might buy from a street hawker in Malaysia or an authentic Malaysian eatery.

And, of course, they were nothing like Cornish pasties or ‘Oxfordshire’ pasties or any Western-style pasty.

They were neither British pasties or Malaysian curry puffs, exactly. They were made by an ex-Malaysian Brit, previously from London, concocted from an amalgam of Malaysian-inspired recipes and with input from an Englishwoman, prepared and cooked in my new home in Oxford.

They were my pasties – my taste of my two homes. And they were yum. 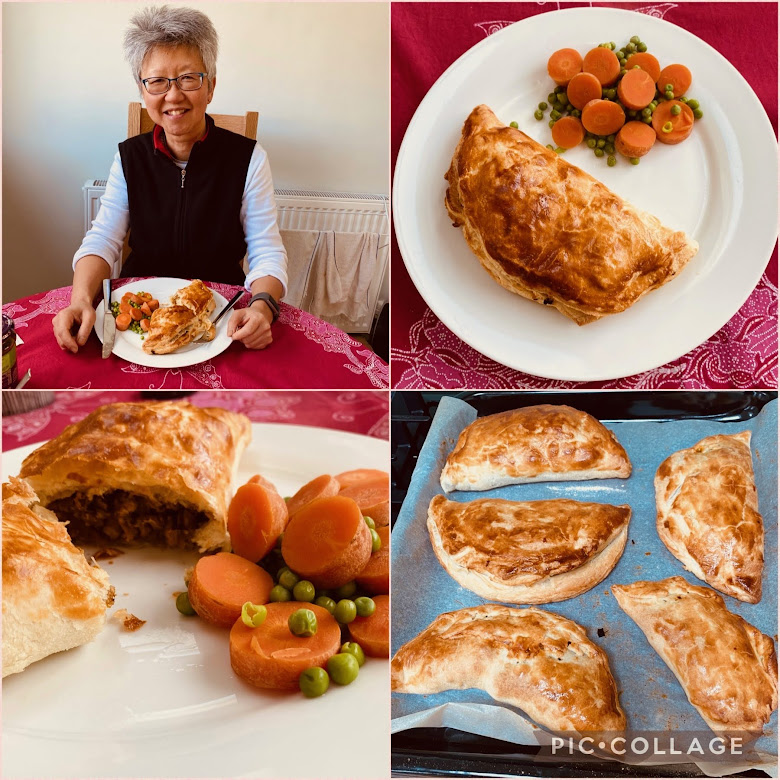 The contents of this site, including any post, comments and links, are subject to this Disclaimer – please read it by clicking here.
« Theatre is Not Limited – The Michael Knight Theatre Company CCV0403 ¦ Creative Conversations [podcast] Mud, Mud Everywhere ¦ Oxford Moments »