Fed up with unpacking and trying to sort her new house in Oxford, writer Yang-May Ooi takes off on a surprising cycle ride.

A few weeks after I moved into my new house in Oxford, there were still many boxes left to unpack. The place felt a bit more livable – but in the way that a squat is livable. My focus had been indoors, sifting through my things, sorting out where to put stuff. And I had achieved a semblance of order, true. But there was still much to be done.

Outside, the sun was shining. Outside was Oxford, the city that I had yet to re-discover. It was November. The days were getting shorter. It would soon be misty and cold. And there might be another lockdown.

I had been so busy trying to make my home within the walls of my new house, I had forgotten that a sense of home also comes with a feeling a kinship with my local area.

It was time to explore. 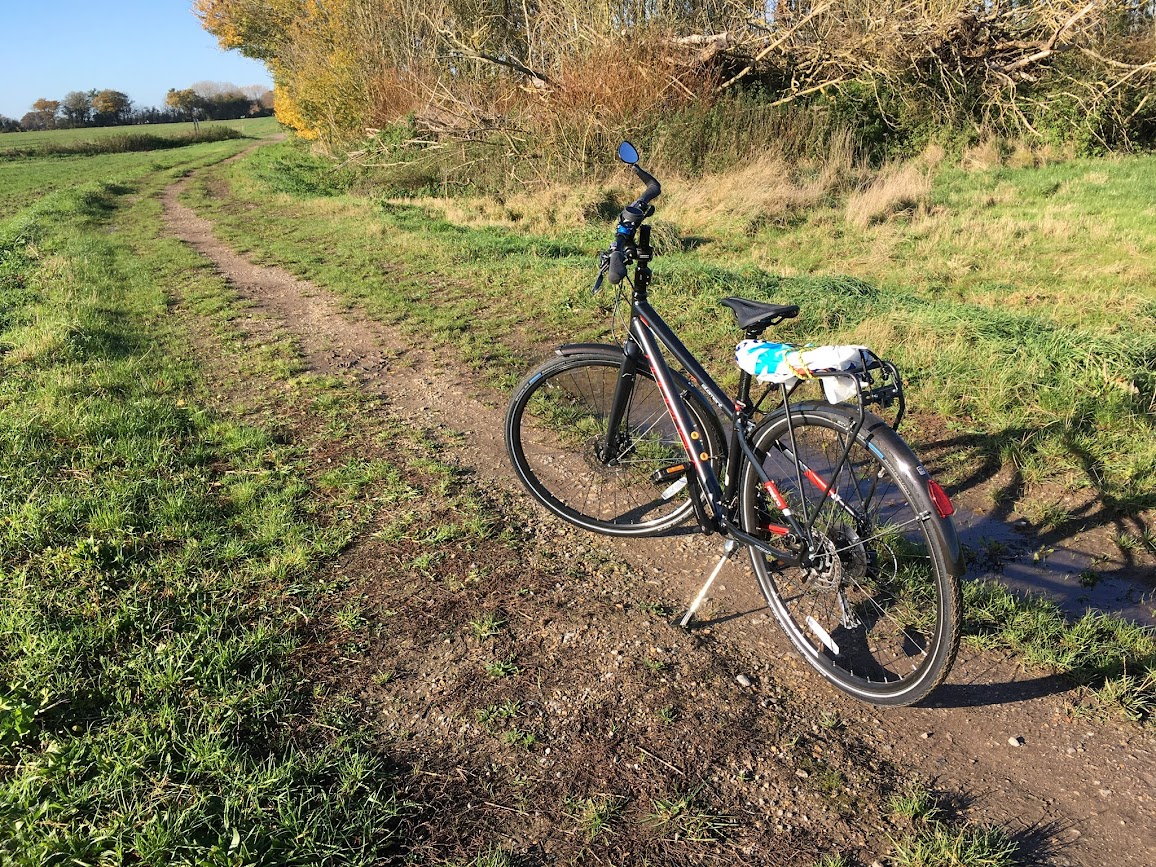 Cycling without Knowing What Lies Ahead

I got my bicycle out of the garage and pumped up the tyres. I dug out my helmet and high viz vest. Living in a cycling city was one of the big attractions to me for moving to Oxford. I had been here several weeks and had yet to get out on a good ride.

There are plenty of cycle paths in and around Oxford. It bills itself as “The Cycling City”. A quick google will throw up many cycling routes online in descriptive form or as gpx files that have been travelled by other cyclists.

But I wanted to go out on a ride without preconception, knowing nothing of the route ahead.

So I got onto Naviki,  the “world-wide bicycle route planner and navigator”. I set it to generate a circular route that was around 9 miles, starting from my house, in Leisure Mode. That setting chooses scenic cycle paths and footpaths that had little or no traffic. In London, it had the tendency to take me through foot tunnels where I had to carry my bike up and down stairs and along sometimes dodgy-looking alleyways. What would it do here in Oxford?

Once the route was generated, I sent it to my phone and paired Beeline satnav strapped to my handlebars, hopped on and set off.

The Beeline looks like a compass. All it has on the display is an arrow. You just follow the arrow. So that morning, I did not have a preview of the roads or area lying ahead of me in the way that a traditional satnav would show you. I had of course seen an overview of the route when Naviki generated it but I decided not to look closely at it – all I saw was a wonky red loop. 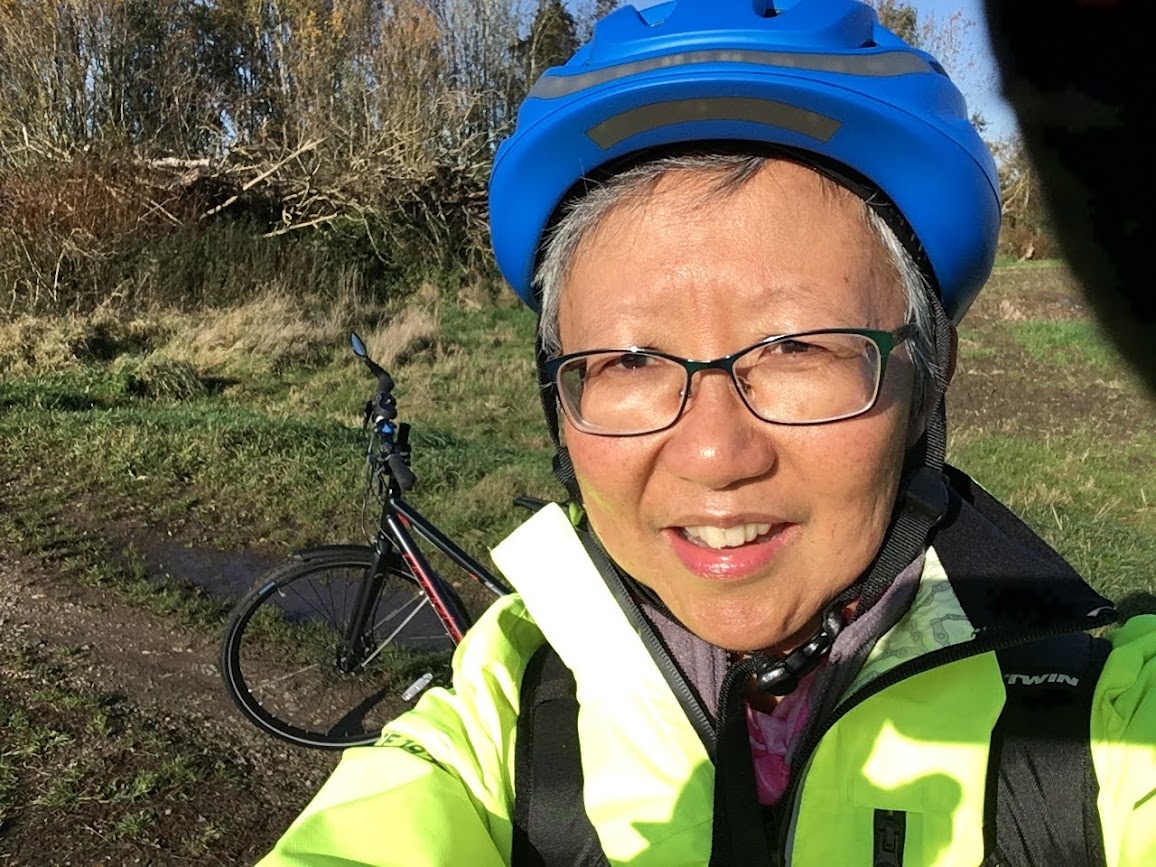 Falling Off without Caring

The ride set off in a normal enough fashion, taking me through suburban streets out to the more rural feel of Kennington Village. It joined a cycle path alongside an A road, past Kassam Stadium. I pedalled at an easy pace, taking in these new areas, enjoying the sun on my face.

Then the arrow pointed right. But I was on an A road with no roads or paths turning right – or left, even. I stopped and looked around, bewildered. I got my phone out to check the app. Yup, it was working. I peered to the right again. Aah, there it was.

A muddy footpath across a field.

I trundled my bike down the stony muddy slope and then hopped on when the ground levelled off. This was fun, I thought, bumping along the track.

Until it got narrower. And muddier. And more overgrown with shrubs, nettles, prickly bushes and increasingly hemmed in by an iron fence.

I skidded, hit a bush and fell off.

A short hobble on, laughing out loud, wheeling my bike beside me, I found tarmac and set off again.

Country lanes led me to a little village. Coasting through, I found myself directed by the Beeine to the car park of a pub, The King’s Arms – and a little wiggle after that brought me to its river frontage. 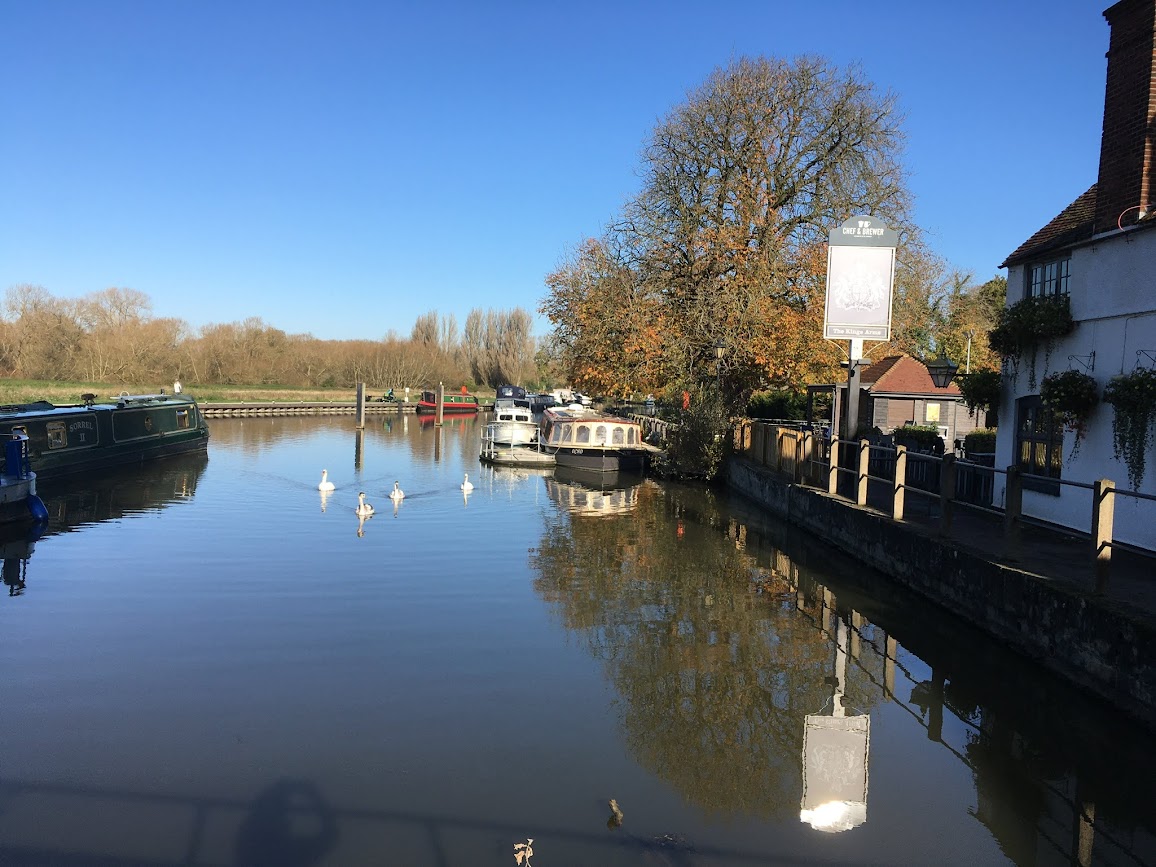 Swans glided by on the smooth surface of the water. The morning sun glowed on the winter trees. A house boat was moored on the towpath. The pub had the old world feel of many classic English country pubs.

For Oxford locals, Sandford Lock and the King’s Arms are part of their lives. The place to come for Sunday lunch or a lazy drink in their beer garden after a leisurely walk along the towpath. 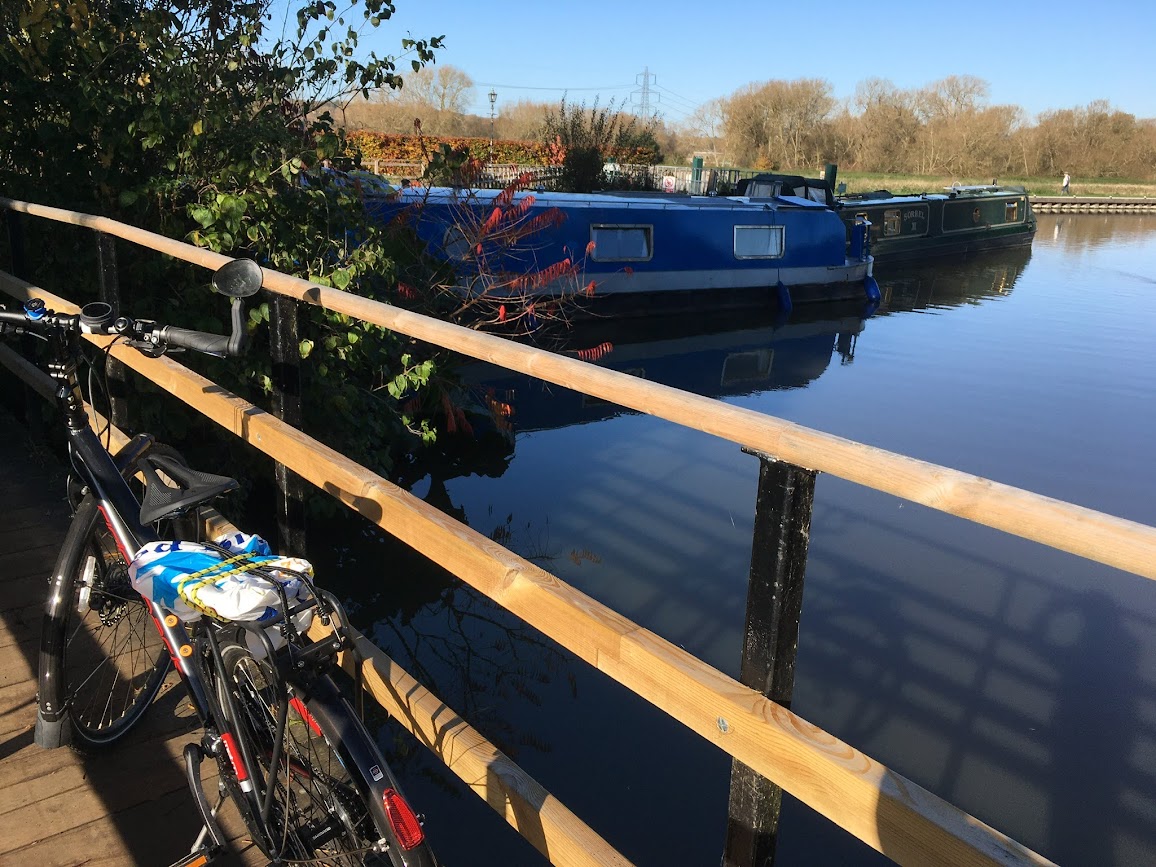 But for me, it was an amazing, astonishing and wonderful surprise. To discover this beautiful place for the first time as a newbie to Oxford, on this odd, unexpected cycle ride along A roads and country lanes and a muddy field. I felt my heart soar. My cheeks creased into a huge grin.

Since that sunny morning, I’ve been back to Sandford Lock a couple of times. Once, walking beside the river from Iffley Village with my partner and a friend on a misty Sunday morning in December. The second time, with Oxford author, Sylvia Vetta, for a long muddy ramble in the nearby fields just before Christmas.

I have yet to have lunch or a drink at the King’s Arms but once lockdown restrictions are eased and life can encompass visits to pubs and beer gardens again, I shall giving my order at their bar. But whatever goes on, I will be out on walks and cycle rides from my Oxford house that will bring me to Sandford Lock again. And again.

As I write this, I realise that Oxford is becoming home.  I am an Oxford local. Sandford Lock is a part of my life.

The contents of this site, including any post, comments and links, are subject to this Disclaimer – please read it by clicking here.
« Knitwear for Lamp Posts ¦ Oxford Moments Making a New Home in Oxford ¦ Oxford Moments »