Is My Wardrobe Enchanted? ¦ Oxford Moments

All this talk of enchantment during times of crisis (see this blog’s previous posts Rose Lane, Pathway to Enchantment and The Enchantment of Christchurch Meadow) prompts writer Yang-May Ooi to think about fantasies of escape from ordinary life  – especially one famous fantasy that has an Oxford connection.

Is My Wardrobe Enchanted? ¦ Oxford Moments

My new house is a 1930s end of terrace/ semi in a residential suburb of Oxford. It is tiny in the way that many Oxford houses are but my predecessors built some seemingly cavernous wardrobes in the two upstairs rooms.

As I was unpacking a few months ago, the wardrobes seemed endlessly to accommodate my (too) many clothes and shoes that I had brought with me from my life in London.

You remember those days, don’t you – when we needed more than just two sets of stay-at-home slouchy pants and hoodies? (I don’t know about you but I need two sets because I still have standards – one goes in the wash while I wear the other.)

Back in those wild heady pre-Covid days, I had to have wide range of outfits – we all did, didn’t we? Tops and jeans, jackets and trousers, shirts and skirts, shoes and boots and more for different events and a myriad of social occasions. I have smart clothes for restaurants and cafes. Casual or semi-smart for the theatre and cinema, depending on who I would go with. Metropole gear for art galleries and exhibitions, chic fashion for dinner parties. I have a swishy midi-skirt and heels for ballroom dancing. Slinky tops and slim Chelsea boots for any old dancing. Hipster looks for stand up comedy, trendy intellectual flair for poetry readings and other gigs – ah, those gigs, all of us crammed into tiny upstairs bars in crowded pubs! 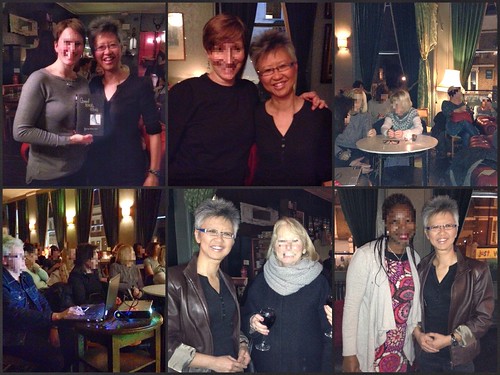 Ah, those wild days of going out! – Yang-May Ooi at the Womens Institute Literary Evening, London 2016

Now here they all are in my roomy wardrobes, my clothes and footwear, gazing reproachfully at me every week when I go to change my slouchies. Each outfit seems to say: Why does that set of drab grey nothings get taken out but not me? Me, choose me, I hear their plantive cries, take me out again.

The other morning, as I eyed them longingly yet again on wash day, one arm reaching for the clean grey hoody, I realised that this wardrobe was big enough and deep enough for me to step fully inside and glide the door closed.

I let go of the hoody hanger and reached further in. Might there be a secret door at the very back leading to another world? 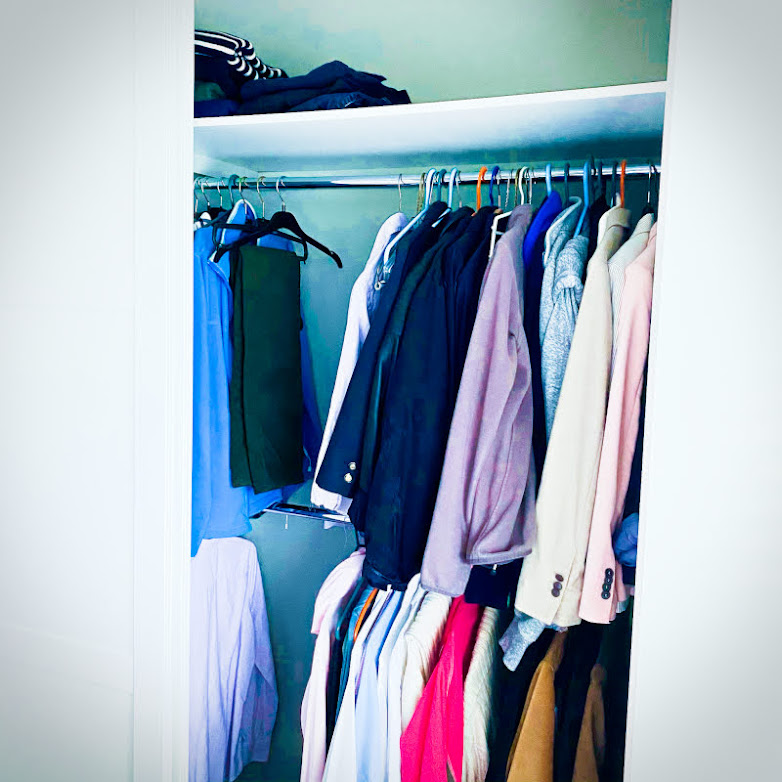 Like many of us in this third lockdown, I really could have done with an escape from the never-ending monotony of Staying at Home. I could have done with finding my hand grasping a door handle behind my many jackets and pushing open the portal to a fantastical adventure. Well, actually, it needn’t have been fantastical or even an adventure. A portal to my local cafe buzzing with people, clamourous with the roar of coffee-machines and loud voices, bodies jostling for space, the noise of cutlery and the smell of cappuccino and fresh cakes … that would have done just as well.

Can We All be Tempted?

A short walk from my house, C.S. Lewis, looking out of his Fellow’s rooms in Magdalen College in the 1940s/50s, imagined an enchanted kingdom at the back of a large wardrobe.

I read Lewis’s The Lion, The Witch and The Wardrobe as a child in Malaysia. I remember only snippets of the story. Like many who have read the book, an enduring image is of Lucy, the heroine, pushing aside fur coats and other grown up attire in a cavernous old wardrobe to discover the door to a snowy, enchanted landscape. In the tropical heat of my childhood home, I was entranced by the snow and ice as much as by the magic doorway.

But it was Edmund I felt an affinity with, not Lucy nor her other forgettable siblings – in my recollection, he was book-ish and be-spectacled, the intellectual. He was the outsider who questioned, who would not toe the line – unlike his dullard siblings who obediently went along with the somewhat holier-than-thou Aslan.

I remember thinking that Lewis treated Edmund unfairly. In the telling of his story, Lewis portrayed him as the villain of the siblings. To me, however, Edmund had the greatest complexity – and humanity. He was like Shylock – the one that we are meant to hate but who is actually the most like all of us.

The central memory I have of the book, however, is of the Snow Queen luring Edmund into her troika with Turkish Delight. At that time, I had no idea what Turkish Delight was but I wanted some! I wanted to be Edmund, to be the one to climb into the troika, to feel the warmth of the Queen’s fur coat against my cheek,  to smell her hypnotic perfume, to lean into her arms and taste Delight from her fingertips.

Photo Source: The Chronicles of Narnia: The Lion, the Witch and the Wardrobe by C. S. Lewis; Illustrated by Pauline Baynes

Have I become a Witch?

The Snow Queen, in my mind, was beautiful and alluring – like Eleanor Parker as the Baroness in The Sound of Music – and also thrillingly dangerous.

I realise now, on checking Wikipedia, that all these years I have been conflating the actual character in the Narnia book, the White Witch, with the Hans Christian Anderson Snow Queen who lured the gormless Kai with a kiss!

Well, I guess that mental mashup tells you quite a lot about me and my preference for interesting, powerful and sexy women rather than Christ-like, Aryan authority figures such as  … um, a talking lion.

I felt that Lewis did not have a taste for the kind of woman I wanted to become.

Yes, I wanted to be a witch – since the only alternatives in Lewis’s world seemed to be the innocent naif or good wife and mother.  A witch, historicially, was a healer, a wise woman and a clever one, too, who might have been able to read at a time when most people were illiterate. She generally lived alone or with her companion or coven of other witches – she was, essentially, a woman who couldn’t care less about men (an attitude most guaranteed to enrage a certain kind of man). She was not necessarily beautiful in a conventional sense, she made her own rules and was feared by many. As I said, an interesting, powerful and sexy woman.

Am I already in Narnia?

Outside it began to snow. Large flurries blustering across the window. Turning the ordinary world magical in layer upon layer of white.

No slouchies this morning. I picked out a pair of jeans, a long sleeved top, a roll-neck sweater, a gillet, two pairs of socks – these lucky items of clothing were having their chance to go out today! 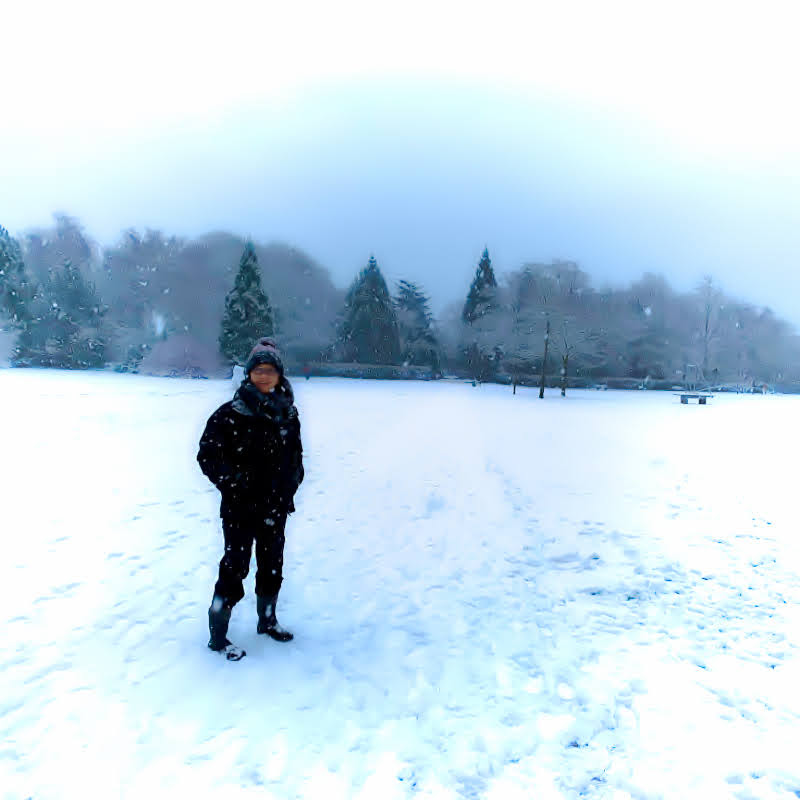 We went out into the snow, my companion and I, dressed in outdoor clothes we had not had the chance to wear for awhile. In the cotton wool landscape, we crunched across virgin snow, had snow ball flights, laughed at family bubbles making snowmen, flapped our arms and legs making snow angels, tasted cold flakes on our tongues.

Later, back at home again, dripping wet puddles on to the floor, we shed our snow-caked jackets, damp clothes and wellies. We got back into our slouchies and put on dry socks. We sat on the sofa with steaming mugs of tea. Outside, the snow kept falling and the world stayed magical for a little longer.

My companion reached for a hexagonal box she had brought from the kitchen. It was pink and white and when she opened it, there was the scent of icing sugar, candy lemon and rose. She gently spread out the taffeta paper like the petals of a rose and offered me my choice of snow dusted Turkish Delight. 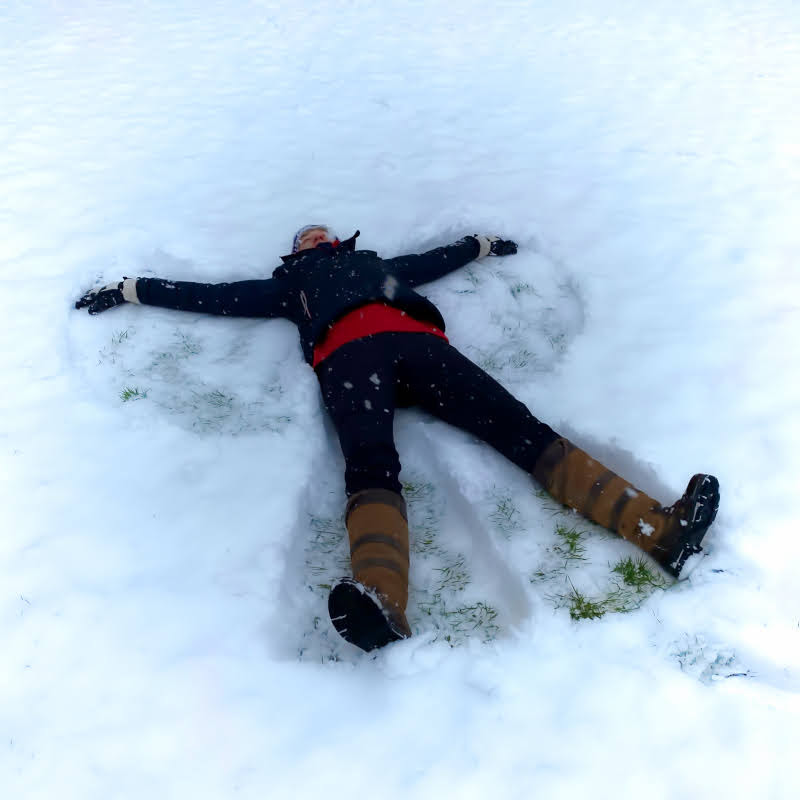 The contents of this site, including any post, comments and links, are subject to this Disclaimer – please read it by clicking here.
« Mud, Mud Everywhere ¦ Oxford Moments Oxford, the Hollywood of Stories – Sylvia Vetta CCV0402 ¦ Creative Conversations [podcast] and Oxford Moments »